PREVIEW: ‘How Can You Be Pro-Life?’, this Tuesday

In America, things are changing. Abortion rates are at their lowest since Roe v. Wade. Young Americans just keep getting more pro-life. Pro-choice campaigners find themselves backtracking. Every year, hundreds of thousands March for Life in Washington D.C. 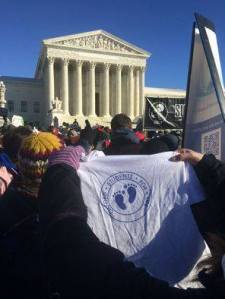 ‘Ah,’ you may say, ‘that’s America for you.’ But the same thing could happen here. If the controversy over sex-selective abortion shows anything, it is that, deep down, nearly all of us recognise the humanity of the unborn. Thanks to modern technology, it is becoming harder and harder for us to ignore them. But they will remain forgotten unless pro-lifers speak up.

There are also serious dangers on the horizon. Another assisted suicide Bill is coming before the House of Lords this year, and there has been little debate about what such legislation would mean. Again, anyone who believes in the value of human life should be doing something about it. But how?

That’s what we’ll be exploring on Tuesday night in Christ Church, with a panel discussion on ‘How Can You Be Pro-Life?’ We’ll be hearing from OSFL committee members, as well as two experts: the bioethicist Stephen Barrie, and Mark Bhagwandin of the charity Life. There will also be plenty of time for questions. We’ll be asking what students can do on campus and in our communities, how we can influence lawmakers, transform the culture and build our own pro-life generation. And even if you don’t want to change the world, there’s wine and cheese afterwards.